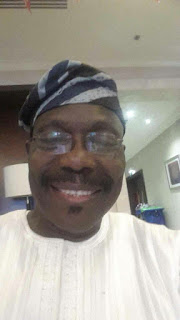 Eid Mubarak, happy Sallah to friends and all lagos state PDP members. Our alliance is all about making success history in the coming council election. we shall make records of victory without violence. My strategies is beyond what you can physically see. I'm not known for violence nor lies or corruption. Believe me, follow instructions, be tactical and be patient. Barka de sallah.Salvador Moshood PDP State chairman (Makarfi)
Posted by Jeforian at 16:53 No comments: 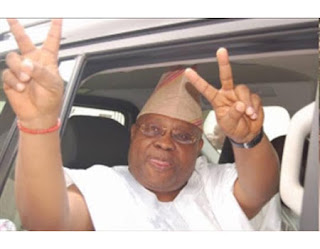 The candidate of the Peoples Democratic Party (PDP) for July 8 bye-election for Osun West Senatorial District, Dr Ademola Adeleke has said he would continue the philanthropic legacy of his late brother, Senator Isiaka Adetunji Adeleke, with a view to better the lots of indigent people in the society.

He also said he had commenced a N250million scholarship scheme for the youth of Osun West, with a tackling poverty and empower indigent students of his constituency to realise their educational projections.


Adeleke, who stated this in Iwo, the headquarters of Osun West Senatorial District, while being presented to the PDP leaders charged the people of the 10 communities, constituting the district to come out in large number to vote for the PDP during the July 8 bye-election.
While expressing appreciation to the party leadership for accepting wholeheartedly, he maintained that he was overwhelmed by their show of support towards him, stressing that “I promise not to disappoint you. I’ll continue the philanthropic legacy of my late elder brother, whose main worry was how to better the lives of the masses”.

“To kick start, I have rolled out scholarship scheme of N250million for the youths of Osun West Senatorial District, but it is important for all eligible people go out and vote for out PDP during this forthcoming July 8 bye-election and next year governorship poll.”

“I have been in politics since 1991. My late father and brother also taught me a lot, especially to be good to people, which is what I’ve always been doing and will continue to do”, Adeleke remarked.
In his remark, a member of the PDP Board of Trustees, Alhaji Shuaib Oyedokun lauded the process which brought about the accord in the party and enjoined every member to go out and canvass for the party’s candidate.

Similarly, former governor of Osun State and the candidate of the PDP in 2014 governorship election, Senator Iyiola Omisore said “Osun West is very important to everyone of us, that’s why we decided to come together and honour the memory of our late senator by massively supporting his brother, Ademola Adeleke to emerge victorious in the bye election.”

Culled from Nigerian Tribune
Posted by Jeforian at 01:26 No comments:

Osun State APC in confusion over the choice of candidate for the coming bye-Election in the state. 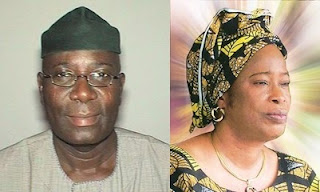 There was controversies at Osun state governor's house  yesterday as Apc elders caucus from Iwo zone led by Chief Oladele Olajire informed governor Rauf Aregbesola that Senator Mudashiru Hussein can not lead Apc to victory in the forthcoming bye election of Osun west senatorial district and advised Aregbesola and leadership of Apc to replace his name with former speaker of House of Representatives Hon Olubunmi Etteh.

Hon Olubunmi Foluke Etteh is a grassroot politician,she represented the Ayedaade/Isokan/Irewole federal constituency in Osun State, She was initially elected in 1999 as an Alliance for Democracy (AD) member, but switched to the People's Democratic Party (PDP) when running for re-election in 2003,Etteh is one of the APC strong political leader in Irewole local government,She was elected to the position of speaker unanimously in June 2007, and is the only woman to have held this position in the Nigerian government.

Senator Mudasiru Hussein candidacy is a wrong permutation at this time, How can Speaker of the house of assembly Hon Najeem Salam come from Ejigbo,Member of House Representative Hon Mojeed Alabi also from Ejigbo and Apc will go to the same town to pick Senate candidate Mudashiru Hussein.

ISIAKA ADELEKE MUST NOT DIE IN VAIN - OMISORE 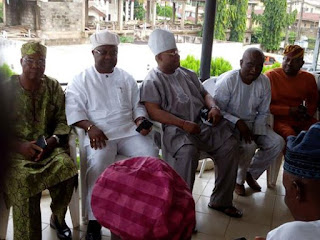 PDP leader in Osun State Otunba Iyiola Omisore has urged all democrats to cast their votes for Ademola Adeleke in the coming Osun west bye election.

Speaking in his house in Ile  Ife when the senatorial candidate of the party paid a solidarity visit to him, Omisore said the election of Ademola became necessary because of the  mysterious death of his brother.

He stressed  the need for all and sundry to vote for Ademola Adeleke for him to complete the tenure of his late brother and also to sympathise with the family over the untimely demise of the late senator.

Senator Omisore stated that since we are all mortals we are all bound to return to our creator one day adding that he would do everything within his capacity to ensure that victory comes the way of the party during the election.

He called on all the factions in the party to close ranks and admonished those feeding fat on the crisis in the party in Osun to desist from such henceforth.

Earlier  the former speaker of Osun State House of Assembly Hon Adejare Bello while introducing those in the entourage of the senatorial candidate, said he was happy to re unite with Omisore adding that without the support of Otunba Omisore it wouldn't be possible to coast home victory in the coming election.

He spoke further that the need to win the coming election necessitated the coming together of the two groups in Osun to support the family of Adeleke.

He pointed out the the alliance was based on equal partnership adding that the candidate does not belong to any of the two factions in Osun State PDP.

He revealed that the coming together to work for the candidate was the handiwork of Otunba Omisore and other notable leaders like Dr olu Alabi, Oluomo Tajudeen Oladipo and few others.

In his remarks Barrister Ojo Williams who led the negotiation team  from Omisore's group allayed the fears of some members of the group that they've been traded off.

He re echoed Otunba Omisore's statement on the needs to give sympathetic votes to Adeleke's family as a compensation for the loss the family suffered as a result of the death of the late Senator .

He stated further that in Yoruba land only a younger brother is allowed to inherit from what his older brother left behind not the other way round, hence the need for supporting Ademola Adeleke as a compensation for the death of his brother

The senatorial candidate Dr Ademola Adeleke in his response said he has  little or nothing to say, pointing out that he has come back to where he belongs.

" It's true that we left PDP for APC as a result of minor misunderstandings but I can tell you that during our short sojourn in APC the souls of all Adelekes  were here" .

He pointed out that people of the state were looking forward to the party to lift them out of the abyss of  abject poverty that APC administration in the state has plunged them into.
Posted by Jeforian at 19:57 No comments: 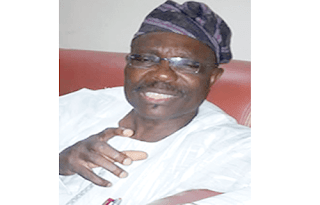 Good Afternoon Gentleman of the press. We are all not unaware of the Leadership of problem rocking our party, which we are awaiting the decision of the Supreme Court to end the crisis. This is why the party needs experienced, knowledgeable, articulate and a gentleman, leadership at all levels.
By extension, the Alimodu Sheriff group of Lagos PDP, with the special interest of Senator Buruji Kashamu, also took advantage of the crisis, connive with APC to reduce the chances of PDP Success in the coming Lagos State Council Election.

They came with several violent actions to disturb the smooth running of Salvador led PDP administration in Lagos State. But with Salvador leadership quality and experience, he refused to distracted and failed their plans.

You may recall the press statement of one Mr Segun Adewale in May 2017 promising to accept the Leadership if Salvador and his readiness to be Vice Chairman to Salvador.
This Sheriff group broke the promises immediately it was made. They knew that they are less than 10% of the PDP membership in Lagos State. This shows why they only believe in violence for every move made and they lack quality and reliable leadership with no visible elders and leaders.

This is why we are determined and ready to make the positive change in all the local government area and the local council development area. We also pledge that we will not disappoint the public when voted into power.

I refuse to be distributed, the Makarfi group of PDP under the leadership of Hon Moshood Salvador has refused to allow their teaming members disenfranchised. If legal solution us being delayed, we have taken to political solution to Form a political alliance.
"Political alliance is an agreement for cooperation between different Political parties on common Political agenda, often for the purpose of contesting an election "

We are PDP any day and anytime. We only have a Pre-electoral Political alliance with Labour Party to contest this coming Local Government election only. This is not the first time of this type of alliance in Nigeria.

Again in 2003, Alliance for Democracy [AD] of Lagos State, had an alliance with PAC under the leadership of Late Alhaji Olawale Dawodu.
Also recently in 2017, Delta State, PDP Han an alliance with Accord Party to defeat APC in their last election.

I am now appealing to all lovers and sympathizers of PDP in Lagos State to cast their vote for "Labour PDP alliance" and vote Labour Party. It is an alliance. We never decamped to any party. We never declared for another party and we never dumped our dear PDP. We are the PDP strength in Lagos State. In this pre-electoral alliance, we have 342 Councillorship Candidates and 52 Chairmanship Candidates.

As from this very moment, I now declare that all our candidates must start pasting their posters, commence the house to house campaigns and educate electorates on the circumstance of our using Labour Party for this Council Election only.

The L.G.A Chairmen, the Ward Chairmen and all our LCDA Chairmen must start work tirelessly to educate the public on our circumstance of this Council Election and work closely with all their Labour Party counterparts and candidates in their various Local Governments