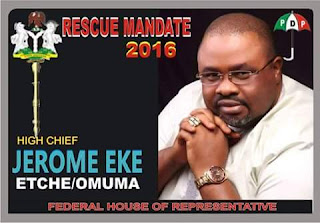 The Peoples Democratic Party Candidate for Etche/Omuma Federal Constituency. High Chief Eke Jerome Amadi, has kicked off his campaign for the 2015 general elections.

In his speech, the Chairman of the Peoples Democratic Party (PDP) in the area, Hon. Nwankwo Chimezie,s at the palace of His Royal Highness, Eze Amaechi Monday, Onyeisi  Agwuru 1 of Ozuzu clan, thanked the entire people for their warm reception.
Hon. Nwankwo stated that the objectives of the courtesy call was to present all the candidates approved by the party (PDP) to contest the various positions both at the State and federal levels, adding that, their decisions were based on the ground that the former House of Assembly and House of Representatives members have disappointed the entire people with little or nothing to show.
He therefore, presented the three candidates to the people, which include High Chief Eke Jerome Amadi, for House of Representatives, Etche/Omuma Federal Constituency, Hon. Iroanya Nnanna Opurum for Rivers State House of Assembly Constituency1, while Hon. Ejiogu Tony will represent constituency II in the Rivers State House of Assembly.
Responding, Eze Nwangwu Josiah, Ochimba1 of Ihie Etche, on behalf of traditional rulers, who also represented His Royal Highness Eze Amaechi Monday thanked the entire party faithful, adding that, they have given them support and would continue to pray for them. He also advised them to always remember Ozuzu clan and support the clan by electing one of their own as the next Chairman of Etche Local Government Area after the general election.
Also, Eze Ozuemene Celestine, Ochimba 1 of Umuweze Egbu Etche appealed to the party to do justice by electing one of their persons as the next Chairman of the party. Highlight of the event include prayer and blessing of the candidates by the traditional rulers.
At the reception ground, High Chief Eke Amadi Jerome thanked the clan for their supports, appealing to them to vote wisely particularly all the candidates from President to State Governor, Chief  Nyesom Wike and others.
He unveiled his blue print for Etche and Omuma. Which include provision of road, quality representation, electrification of communities, general empowerments, regular consultation and meetings with party members in both Etche and Omuma.
He also received blessing from the Royal Majesty, Eze Samuel Amaechi Dr. S.A Ogberi of Omuma as the campaign team visited Igbo Etche and Omuma respectively.
Posted by Jeforian at 20:54