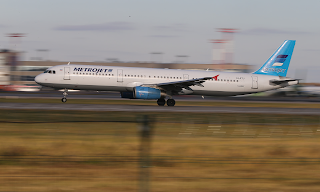 Moscow has played down an Islamic State-linked group's reported claim that it downed a Russian passenger jet in Egypt's Sinai peninsula.

The Airbus A321 crashed into mountains shortly after losing radar contact near cruising altitude, with all 224 passengers and crew thought to have been killed.

A statement attributed to the Wilayat Sinai (Sinai Province) group said: "The fighters of the Islamic State were able to down a Russian plane over Sinai province that was carrying over 220 Russian crusaders. They were all killed, thanks be to God."

The statement was circulated on Twitter and also posted on the Aamaq website, which acts as a semi-official news agency for IS.

It is unclear whether militants in the region would have the capability to attack the plane, which was flying at around 31,000ft. 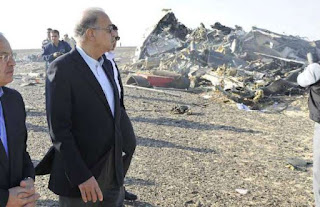 © Provided by Sky News
The Airbus A321, operated by Russian airline Metrojet, took off from Sharm el-Sheikh shortly before 6am local time, bound for St Petersburg.

It disappeared from radar some 23 minutes into the flight. Data shows it was plunging 6000ft per minute before it lost contact.

The plane was found in the Hassana region, 22 miles (35km) south of Arish.
There were 214 Russians on board, three Ukrainians and seven crew members. Authorities say no one survived - despite earlier reports that voices had been heard from the wreckage.
At least 150 bodies, many of whom were still strapped to their seats, have been recovered so far, including five children.

German airline Lufthansa and Air France have halted flights over the Sinai peninsula until further notice.
There are "a lot of dead on the ground and many who died whilst strapped to their seats," an Egyptian official told news agency Reuters.

He said the plane was split into two parts, "a small part on the tail end that burned and a larger part that crashed into a rock".

Rescuers have found the black box, which could give vital clues about what happened.
In a statement, Metrojet named the pilot as Valery Nemov and said he had 12,000 hours' flying experience, including 3,860 hours in the A321.
It also said the aircraft had received factory maintenance in 2014. 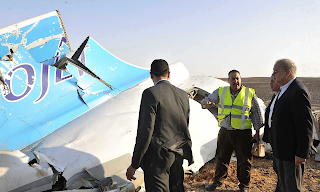 Russian President Vladimir Putin has announced a national day of mourning on Sunday and the country's top investigative body, the Investigative Committee, is looking into the incidenAirbus said the plane was produced in 1997 and had accumulated some 56,000 flight hours in nearly 21,000 flights.

According to Egyptian media, the pilot reported a technical failure shortly after take off and requested to land at a nearby airport, Sky's Middle East correspondent Sherine Tadros said.
But Mike Vivian, former head of flight operations at the Civil Aviation Authority, told Sky News "hostile action" should not be ruled out.

"I am absolutely certain that will be one of the focuses of investigators on the ground," he said.
Egypt's North Sinai is home to a two-year-old Islamist insurgency and militants linked to IS have killed hundreds of soldiers and also attacked Western targets in recent months.

Several hundred relatives gathered at Pulkovo airport near St Petersburg after the crash, but many have now been taken to a nearby hotel.
© STRINGER/Newscom/ReutersSky's Moscow correspondent John Sparks says authorities have so far given relatives very little information.
One woman at the airport, Yulia Zaitseva, said her friends, a newlywed couple, were on the flight.
"We were friends for 20 years, " said Ms Zaitseva. "She was a very good friend who was ready to give everything to other people. To lose such a friend is like having your hand cut off."
Posted by Jeforian at 21:24